The Once Overlooked, R. M. Schindler 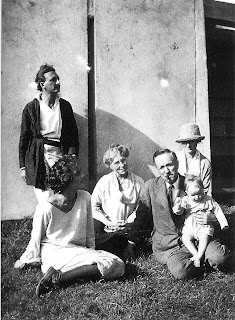 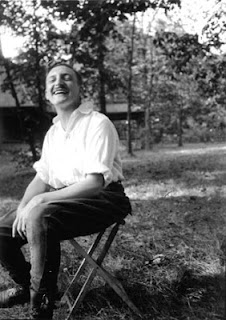 Dubbed as “the least understood American pioneer of modern architecture,” Rudolph Michael Schindler was an architect who had his own set of values, which ultimately set him apart from the prominent architects of his time. He was, foremost, an artist before an architect. In a letter written to his friend and rival, Richard Neutra, Schindler stressed the important notion of creating work for the sake of expression without expecting a result of profit. This socialistic mindset clarifies that Schindler’s objective was never wealth or fame. What he valued more was art, and this allowed him to experiment, freeing him from the architectural conventionalities of his period. In appearance, Schindler was much like a bohemian, dressed in a pullover middy shirt with full sleeves, a smock-like jacket of rich fabric, a cummerbund, white duck trousers and Mexican huarachis. With his hair curled back, he was frequently shown in photos striking dramatic poses or laughing candidly. These countenances did not betray. It simply matched his genuine friendliness and enthusiasm for life.

He was nevertheless an elusive personality. While he stood at the forefront of progressive architectural and social thought, Schindler had a taciturn disposition, always hiding his serious thoughts behind his joking manner. In this way, he did not cause any apparent conflict within the world of architecture. Instead, he was quietly challenging the establishment with his works.
Born in Vienna, Austria in 1887, Schindler studied engineering and architecture under the guidance of his influential mentors Otto Wagner and Adolf Loos. In 1914, Schindler left for Chicago in hope of finding an opportunity to work with Frank Lloyd Wright, after being inspired by his 1910 Wasmuth Portfolio. He began his work for Wright in 1918. He was sent by Wright to Los Angeles in 1920 to help with supervising the construction of the Hollyhock house, and within a year, Schindler had established himself as an independent architect with the erection of his first piece of work: his home and studio on North Kings Road. Throughout his career, Schindler had designed a hundred and fifty architectural works that constantly challenged conventional methods of design and construction while alluding to his thesis of “space architecture. “ 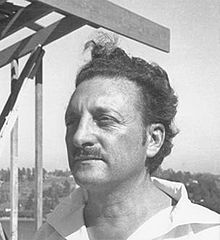 In his 1912 manifesto, “Modern Architecture: A Program,” Schindler proposed that the fundamental idea of a dwelling was rooted in the cave. He spoke of the architect’s ambition as perpetually being “the gathering and massing of material which will eventually form into spaces for human shelter. He argued that the interior space of such shelters were mere after-thoughts, as all efforts at form-making were confined to using plastic structural mass material to decorate and create a face in these interiors. Based on this argument, Schindler suggested that the new method would be dependent on the efficiency of material usage, as this would result in the elimination of plastic sculptural mass. The modern architect would conceive and form a room only with ceilings and wall slabs. In this sense, the architectural design would be led by space, concerning itself with space as its raw material, producing the articulated room as a result. Schindler’s thesis was born here: for him, the real medium of architecture was space.


“The old problems have been solved and the styles are dead… The architect has finally discovered the medium of his art : SPACE. A new architectural problem has been born.”
R. M. Schindler, Manifesto 1912 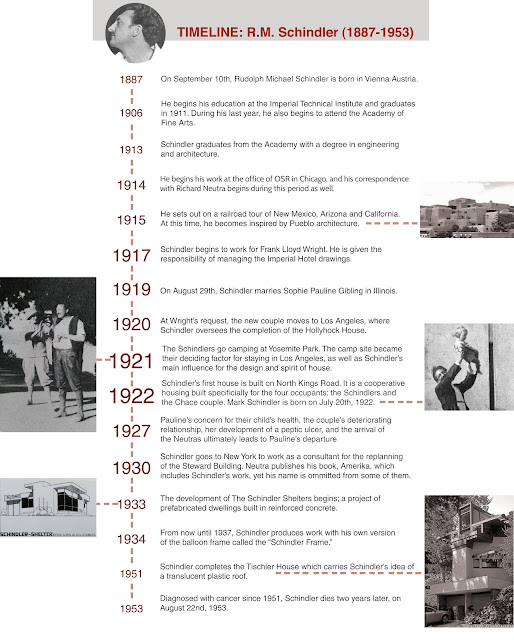 Schindler-Chace House
(a.k.a. Schindler House, Kings Road House)
835 North Kings Road, West Hollywood, California
This house was intended to be a communal dwelling: a living and working environment for two couples, the Schindlers and the Chaces. It was built in 1922 and now functions as a public centre for art and architecture.
The blog is a case study for ARCH 100 & 110.